The United Nations Security Council vote on a resolution to expand its North Korea blacklist after the Asian state’s repeated missile tests, at the U.N. headquarters in New York, U.S., June 2, 2017. REUTERS/MIKE SEGAR

As I predicted, the hermit state we call North Korea has again been sanctioned by the UN Security Council. Yet again, we go down the same rat-hole we now seem to call North Korean sanctions.

On 02 June 2017, the UN Security Council unanimously sanctioned North Korea again for conducting ballistic missile tests in violation of UN resolutions. The latest sanctions are codified in Resolution 2356 (2017).  The resolution was sponsored by both the U.S. and China, although the strongest measures requested by the U.S. were not adopted – e.g. an oil embargo, a ban on maritime shipping, and further trade restrictions on North Korean workers not working in North Korea.

The watered-down measures blacklisted North Korea’s suspected spy master, 13 other officials and four companies. In this context, the UN slapped them with a global travel ban and an assets freeze.

The 18 names will be added to the current blacklist of 39 individuals and 42 North Korean entities subject under UN sanctions.

Further, the American diplomat stated “Pyongyang must first take concrete steps towards ending its nuclear weapons programme,” while stressing:  “Our goal is not regime change. Nevertheless, all options remained on the table and the United States would defend itself “by other means if necessary”. Finally, the U.S. warned  that “[b]eyond diplomatic and financial consequences, the United States remains prepared to counteract North Korean aggression through other means, if necessary.” 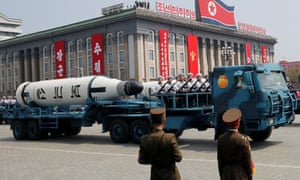 The other blacklisted parties include:

Note that on 01 June 2017, the U.S. also blacklisted North Korean persons and companies for the latest missile tests.

Although the sanctions aim to restrict North Korea’s ability to finance it’s controversial nuclear program, they remain a feeble attempt to halt a regime hell-bent on becoming a nuclear power.

Once again, we continue to burrow through this never ending rat-hole….

Be the first to comment on "UN sanctions North Korea: here we go again down the same old rat-hole"