On 13 November 2017, the EU imposed targeted sanctions against Venezuela. See Council Regulation (EU) 2017/2063 and Council Decision (CFSP) 2017/2074. The EU’s decision is also based on the Office of the United Nations High Commissioner for Human Rights report “Human rights violations and abuses in the context of protests in the Bolivarian Republic of Venezuela from 1 April to 31 July 2017.”

Further, the sanctions prohibit any direct and indirect facilitation of any activities which violate the above listed restrictive measures.

The EU measures are parallel to the existing U.S. sanctions against the Maduro Regime. As reported earlier, similar to the U.S., the EU also views the establishment of the Constituent Assembly as a sham and an insult to democracy. It will be interesting to see whether the EU, similar to the U.S., also blacklists President Maduro and Vice-President Tareck El Aissami. 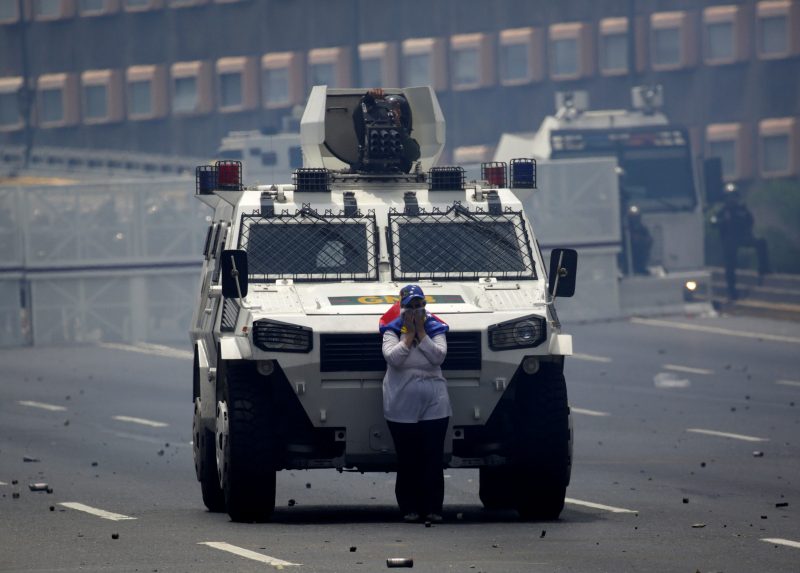 An opposition demonstrator blocks the way of an armored car as riot police clashes with demonstrators during the so-called mother of all marches against Venezuela’s President Nicolas Maduro in Caracas, April 19, 2017. source REUTERS/Marco Bello

It beggars belief what the Maduro Regime is doing to Venezuela. He and his PSUV cronies (Socialist United Party) are really driving that Latin American country into the ground.

For more than a decade, especially after the election of Hugo Chavez, Venezuela has slipped more and more into the abyss.

What started as a ill-fated flirtation with socialism with Chavez, who died in 2013, his hand-picked successor Maduro, has really swirled the country into an economic basket.

Instead of establishing a fairer society, something which has alluded Venezuela for decades, the current government seems to blame the U.S. and the rest of the world for its head-spinning inflation, food and chronic medicine shortages.

The icing on the cake is that Vice President Tareck El Aissami has been put in charge of restructuring the country’s $ 120 billion foreign debt, who has been blacklisted by the U.S. Government for drug-trafficking. This move will certainly not help Venezuela, as many of the foreign investors are in the U.S. or have strong ties to Wall Street.

What will they think of next….

Be the first to comment on "Simon Bolivar no more: EU also introduces Targeted-Sanctions against Venezuela"