It’s being reported that the UK’s ambassador to the EU, Sir Ivan Rogers, has resigned. According to one former top civil servant at the Treasury, Rogers’ departure so close to the start of Brexit negotiations amounted to a “wilful and total destruction of EU expertise.”

Appointed by former PM David Cameron in 2013, Sir Ivan Rogers was expected to not only stay at his post until October 2017, but also play a key role in Brexit talks expected to start in March 2017. 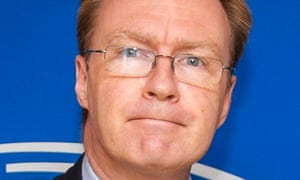 Sir Ivan Rogers is regarded as one of the UK’s most experienced EU diplomats. Photograph: Thierry Roge/European Union handout/EPA

Sir Ivan Rogers lashed-out at the UK’s Brexit negotiations by quitting. In an email to the UK’s EU diplomatic staff, the departing ambassador stated that he was leaving to give time for his successor to lead the coming complex Brexit negotiations – which he warned could take up to 10 years. He also made clear that he was frustrated that UK politicians had not heeded his warnings.

“I hope you will continue to challenge ill-founded arguments and muddled thinking and that you will never be afraid to speak the truth to those in power. I hope that you will support each other in those difficult moments where you have to deliver messages that are disagreeable to those who need to hear them.” Further, Sir Ivan Rogers also wrote “I hope that you will continue to be interested in the views of others, even where you disagree with them, and in understanding why others act and think in the way that they do.”

The former ambassador has repeatedly been criticized by Brexit supporters for his views. Especially his views on the duration of the talks and how other EU leaders view Brexit also caused bad-blood. Sir Ivan Roger’s resignation is another sign that the pressure is mounting for PM Theresa May to go for a hard-Brexit (no access to the lucrative EU single-market).

Its incredible that the UK finds itself in this situation; seeing one of its most respected EU diplomats leave the scene so soon to the start. This does not give the best impression that the UK Government has everything under control. In this context, its amazing that Sir Ivan Rogers was even set to play a crucial role  in the upcoming negotiations, given that his posting at the EU was to end before the two-year limit set by the Article 50 procedure.

Its still early days; the negotiations have still to start, but with Sir Ivan’s resignation and the Supreme Court’s pending ruling on the constitutionality of triggering Article 50, Brexit is rapidly becoming a soap-opera. The problem is that there aren’t many actors to fill Sir Ivan Roger’s role…